You are here:
Quick TipsTraining 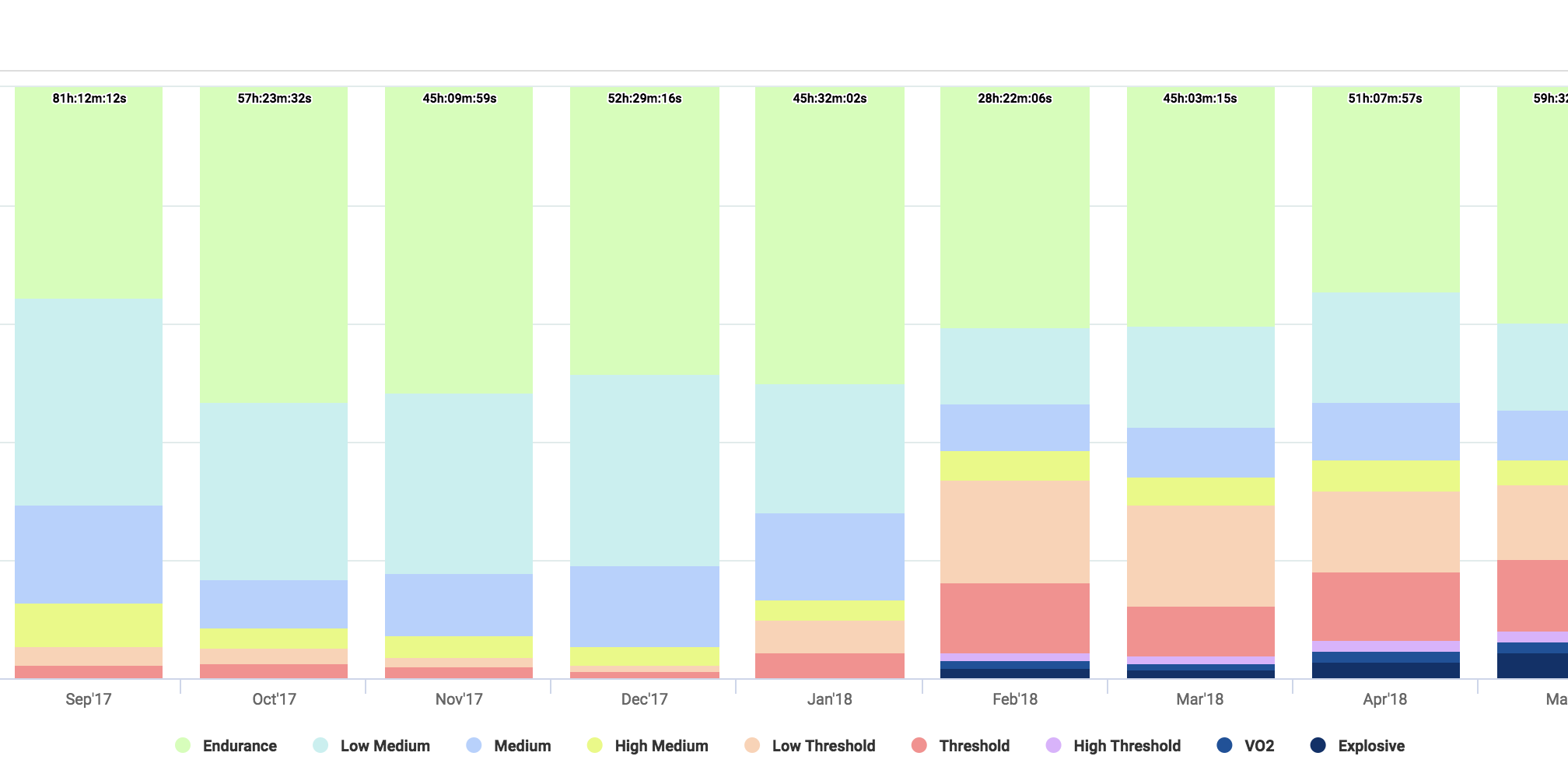 The image at the top of this post shows my time in zones before and after changing my training around February 2018. After one year of training with my new coach, my entire power curve is up 25 watts. Furthermore, I’m confident I can raise the curve by another 50 watts over the coming years. Such increase is significant for an experienced cyclist.

In the past, I spent a considerable amount of time in power zones 2 and 3 (known as endurance and tempo), pounding out mile after mile. As a result, I developed a massive endurance engine for events like Dirty Kanza 200 and the Belgian Waffle Ride. However, despite training over 15,000 miles a year, I would get dropped from fast group rides. Why?

In 2017, as I was training for Dirty Kanza, my former coach had me riding long hours at tempo (80%-85% of FTP) and sweet spot (90%-95% of FTP). I ground my legs into a pulp. My knees were torn up and my quads hurt to touch all the time. In addition, the front of my knee developed scar tissue that protruded from the knee like a ball. As a result, the tendon that runs across the front of the knee would rub on the scar tissue, making it impossible ride.

Looking back, I see that those were overuse injuries, caused by steady riding at the same power and cadence range for long periods of time, and for months in a row.

I was a mess by November 2017. To make matters worse, my coach told me I was “chasing unicorns” thinking I could get any stronger. He was right. I could not get stronger riding tempo for hours on end.

In 2018, I hired a retired world tour pro to coach me. I’m riding less: fewer miles, fewer hours, and recovery days are off the bike. NO MORE long tempo or steady endurance rides, ever. Never! It has been a game changer.

I got off Strava and stopped looking at “average power” and normalized power for intervals and rides. Average power is for average athletes. I don’t look at these numbers or at training stress score (TSS) because I don’t look at FTP.

The main message here is this: as an amateur cyclist, once you have a good aerobic/endurance base, there is no need or advantage in spending significant amounts of time in the lower power zones.

Replacing tempo with higher intensity is key. I train 5 days a week and go hard every day. The intensity per day changes, but it’s normally hard Tuesday, harder Wednesday, hardest Thursday. Saturday is long and very hard and Sunday is just hard. Within each day the workouts go from hard, to harder, to hardest. Within the efforts, they go from hard to hardest. The hardest efforts are always when I’m most tired in the workout and during the week.

I am not advocating ripping your legs off every day. My training is designed in a smart way so that I can recover between workouts. This is obviously what works for my fitness level, rider type and goals. Yours might look different, but the principles included in what I describe below still apply even if you are new to training.

The workouts I do have fewer intervals within the hard efforts, but the big numbers are much higher than before. And the “magic” is in the threshold floor. The best way to describe this is the feeling you have when you are about to get dropped from a ride. Your legs are flooded with lactic acid and the group is accelerating and you are floating off the back.

The threshold floor zone is part of my training in some duration or form every day. I train it seated, standing, high cadence and low cadence. I train it after doing efforts at 350w, 370w, 390w, 410w, 460w. And, I train all the “other” muscles in your legs and butt in all my power zones.

Between efforts, I fully recover. I’m either doing an effort or recovering from an effort (< 220w). When you stop using Strava and stop caring about average / normalized power (compared to your friends), you can focus on recovering from efforts, so you can go harder on the next effort, when it matters most.

In the words of Tom Danielson, focusing on average power makes you an average cyclist. Extended tempo efforts only makes you tired and impacts your ability to go hard. Being able to accelerate, go hard, and recover at low threshold is key to going fast.