You are here:
How toTraining 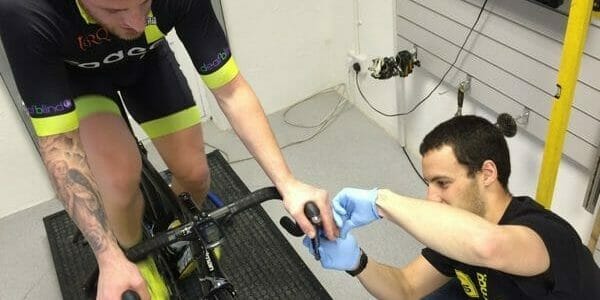 Lactate Threshold is one of the useful measures for determining exercise intensity for training and racing in endurance sports. It can also be used to track fitness gains over time.

Your muscles produce lactate all the time, even at rest (baseline level is between 0.8-1.5 mMol/L). During power exercises such as sprinting, when the rate of demand for energy is high, lactate levels rise. There are two levels that occur when lactate levels rise above the baseline, Aerobic and Anaerobic Threshold, as explained in more detail below.

Aerobic-type training will not help with lactic acid tolerance, however it increases an athlete’s Lactate Threshold. In other words, the body will build a better tolerance to the effects of lactic acid over time during training. Anaerobic training improves the muscles’ alkaline reserves, allowing the muscles to work in the presence of increased lactic acid.  Training at or slightly above the intensity where this occurs improves the Lactate Threshold.

Note that Lactate Threshold is not the same as Functional Threshold Power (FTP), although both can be used as a training tool.

Some have suggested this is where blood lactate reaches a concentration of 2 mMol/liter.  Body fat is the predominant fuel source used at or below the Aerobic Threshold.  Endurance athletes train to increase their AeT because body fat is an unlimited fuel source for all practical purposes.

The blood lactate concentration at the anaerobic threshold is called the “maximum steady-state lactate concentration” (MLSS).  Some highly trained endurance athletes clear lactate at levels much higher than at 4 mMol/liter and therefore require a different testing procedure to determine their accurate MLSS.

There are two different blood lactate testing procedures to determine your Lactate Threshold.  Each test yields different results which are useful in tracking improvements to fitness gains, aerobic limits, and anaerobic limits.

To perform this test an athlete starts by spinning at 50% of their expected FTP.  Every two minutes the tester measures blood lactate and increases the resistance on the trainer by 20 watts.  The tester continues this procedure of measuring blood lactate and increasing resistance until the athlete fails.  The results are graphed with watts on the X axis and blood Lactate mMol/L on the Y axis.  From these results, a tester can graph the watts intercept at 2 and 4 mMol/L.

Power at 2 mMol/L is generally considered the Aerobic Threshold, which is the highest power an athlete can produce while maximizing the use of body fat to produce that power. As the effort increases, the accumulation of blood lactate will increase, and the fuel source changes to predominately carbohydrates.  Power at 4 mMol/L is considered the athlete’s Anaerobic Threshold (MLSS or FTP) under this testing procedure.

Palmer et al in the 1999 Medicine & Science in Sports and Exercise journal developed a different testing protocol to determine MLSS.  This protocol was validated five years later by Kuphal et al in the Journal of Sports Medicine and Physical Fitness.  Testing Procedure #2 adjusts for each athlete’s unique ability to clear lactate.  Testing Procedure #1 above simply assumes power at 4 mMol/L of lactate accumulation is the FTP of an athlete.

To perform this test a coach identifies 3 workloads in 10 watt increments to measure blood lactate, average power output and average heart rate.  The workloads are determined based on previous test results and recent training.  The athlete holds each workload for ten minutes and blood lactate is sampled at 4 and 10 minutes during each of the 10 minute stages.

Robbie Ventura, retired professional cyclist and former member of the U.S. World Team, owns and runs a cycling and triathlon coaching center called Vision Quest.  Robbie has performed over 5,000 blood lactate tests over the years, and I was lucky enough to be around when a friend was testing.  You can find the Youtube video below.